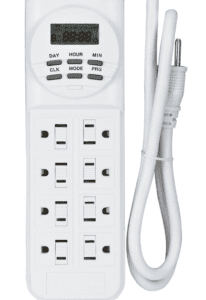 I’ve written many articles on energy efficiency, and read a lot on it as well, where I’ve always gotten frustrated are the uncoordinated tips that are given about improving your home’s energy efficiency. “Buy this super duper auto shut-off plug!” “Install CFLs!” “Replace your windows and doors!” If you’re not taking targeted action, you’re not going to be as efficient as you think you are. You have to know where you use the most electricity before making changes, otherwise you’re not spending wisely, and you won’t see the results you want.

The first three articles in this series on energy efficiency involved discovering how much electricity your household uses, doing a home DIY electricity audit to determine which devices are using the most electricity, and finally, monitoring your family’s behaviour to see how electricity is being used. Now it’s time to synthesize that information and take concrete steps towards lowering your electricity consumption. You’ve done the research, now do the footwork.

Set a target. Let’s say you’ve determined that your family uses 1200 kWh of electricity per month and you want to get that consumption down to 900 kWh/month. Look through your energy audit and any notes on family behaviour regarding electricity you’ve made and decide how easily achievable the goal is (Reducing from 1200 kWh to 900 kWh is a 25% reduction, so it could be a top-lofty goal to start with).

There are four ways to reduce plug load consumption:

Unplug. You know where electricity in your home is being used from your DIY audit. Go after the inexpensive, low hanging fruit first. No, not the light bulbs, unplugging gadgets. Unplugging is a no-brainer. Why is your VCR still plugged in? When was the last time you used it? What about that digital clock and old TV in the spare room you rarely use? What about the coffeemaker? If you don’t use the timer and it has a clock, unplug it. Any cord that comes with a DC converter and feels hot to the touch when it’s plugged in should be unplugged unless in use, particularly cellphone chargers and laptops. Those chargers draw power even when nothing’s attached to them. If you’ve done a meticulous electricity audit, you can see on paper just how much electricity you’ll stop using by unplugging gadgets and just how close to your goal the unplugging will bring you. Not only have you not spent a dime to make changes, you’re now paying less to your utility company too.

Use power intermittently. This means put gadgets on timers, unplug cellphone chargers when something’s finished charging. Learn how to program and use your thermostat for both winter and summer. The earliest models were a pain to program, but the current models walk you through programming fairly easily. Schedule 15 minutes one weekend morning and program your thermostat to meet your family’s needs.

Add auto-shut off bars to your gaming stations, computer stations, and anything else that uses a lot of phantom power, such as cell phone chargers. You can plug several cords into one unit, so you will likely only need two or three cords, maybe you even have some already that you bought with good intentions, but just never got around to using properly.

Look at your DIY Audit, figure out how many power cords you’ll need, then program the devices to be on for only a few hours a day (why turn on a gaming station before 4 in the afternoon, or even, during the week if your kids aren’t allowed to game during the week?).

If you use your outdoor lighting every night, all night, you might want to consider putting it on timers or sensors so that it only goes on when someone approaches. We only use our outdoor lights when we’re expecting company (or the pizza delivery guy), because there’s a street light outside our home that does the job.

Go to saveONenergy for money-saving coupons on many energy efficient products including light bulbs, sensors and auto shut-off timers. Note: coupons are valid in Ontario only.

Calculate how much electricity you’d save if items were completely off for 18 hours per day and see how close you’re getting to your target.

Replace items with more efficient models. This is the area where some investment is involved, so you might want to develop a budget and see how much you’re prepared to do and when.

Lighting. In our house lighting counts for up to 20% of our overall electricity consumption, so it’s worthwhile examining where changes can be made to have an impact on overall efficiency. However, I have a confession to make: I hate CFL bulbs. I don’t like the light they cast or how long it takes for them to warm up. They don’t last as long as they’re touted to because (and no one ever tells you this) the more often you turn them on and off, the shorter their lifespan; they’ve got mercury in them, and you just know that some people are not going to dispose of them responsibly so some are likely ending up in landfill. It’s hard to find dimmable CFLs, and finally, I don’t like their shape because they don’t fit with some of my lamps. Harrumph. But I still use them. Not everywhere, just where I have a tendency to have lights on all the time, like in my office, the rec. room, and the kitchen.

Before changing all your light bulbs to CFLs and LEDs think about what really needs changing. Don’t bother replacing bulbs that are rarely used, ie., basement or hall closets, any other rooms/lamps where lights are rarely turned on. It’s not worth the money, and you won’t be saving enough electricity to make a difference. The next time those burn out, replace it with something more efficient. In the meantime focus on the rooms where lights are on the most often. In our house, it’s the kitchen, the office and the rec. room. They all contain CFLs (even though I hate them). Not only will you see a significant drop in electricity consumption, but in the summer they generate less heat relieving your air conditioner of some stress too. Of course, the corollary of that is that they generate less heat in the winter, so you might be increasing your heating bill slightly.

I like LED bulbs. They’re dimmable, they’re better looking, the light they cast is crisp. Plus, they don’t have any mercury in them. Because they’re still not cost-effective for short-term decisions, it’s best to replace lights where they’re used the majority of the time. Buying LEDs, however, isn’t as simple as going into Home Depot and picking up a few, so I’ve written an article on how to buy LED lights. Invest in good quality ones and they will last the 75,000 to 100,000 hours they say they will.

Appliances. The next time you need new appliances, look for the most efficient Energy Star appliances you can afford. Here’s the thing about Energy Star, in order to be certified, an appliance needs to be at least 20% more efficient than its non-Energy Star counterpart. But there are many, many brands that go much farther beyond the 20% more efficient. Read labels and Energuide information that’s tacked on the front of all models and compare to the brand beside it. European models are so much more efficient than most North American models it’s not even funny — but they’re also considerably more expensive and may be hard or expensive to repair if anything goes wrong. Buy new appliances when you need them, and figure out which one is going to make the biggest dent in your electricity bill (most likely the fridge and the washer).

Note that central air conditioners and furnaces are also Energy Star rated, as are new homes, but not ovens or dryers. If you know how much energy your current appliances use, you can figure out how much electricity a new model is going to save you.

Change Family Behaviour. If you’ve been watching your family’s and your own behaviour, you’ll have noticed when they leave lights/computers/gaming stations on, the fridge door open, chargers plugged in, etc.  Controlling your own behaviour is the easiest and maybe the best way to start is by improving your own habits. Can you line dry some of your clothes more often? Have you set up a centralized cellphone charging station where it’s easy to unplug at the end of a charging session? Have you got yourself into the habit of turning lights and computers off every time you leave the room?

Regarding the rest of your family, doing a few calculations to see how much it costs every time these little actions occur may help, especially if there’s a way to incentivize them to change. If, after a year of behaviour change you saved enough money to treat yourselves to your family’s favourite restaurant, or something even bigger, maybe that would help. Whatever motivates them to think about conserving, you should try. Maybe they can help you brainstorm ideas, if kids take a stake in the decisions, they are more likely to follow through — with lots of reminders, coaching, and encouragement.

Review and compare. Now that you’ve taken steps to reduce your electricity, review and compare your results and see how you’re doing versus your original target goals. There are a few ways to do this: The first is to wait until you get your next electric bill and see what your power usage from the previous year was. If you want instant gratification, and you have a smart meter, and you live in a service area, sign up for Lowfoot.com. Not only does the service send you your electricity usage daily, it starts you off with an automatic 10% reduction target. Every time you use less electricity, you receive a cash deposit in your Paypal account at the end of the month. If you don’t have a smart meter hooked up to your home yet, have a look at the Power Cost monitor. This company has just teamed up with Plot Watt to offer even those homes without smart meters the ability to track and identify accurately, the electricity consumers in the home.

Looking for the latest in green building?

Join our mailing list to receive the latest news on green building materials and methods to help you build and renovate better.

You may unsubscribe at any time.